Moving Pictures
There are no motion pictures. There are only sequences of still images. Motion is a neurophysiological
effect. It is the trick movies play on our brains.
3 CHANNEL SLIDE ANIMATOR is a sculptural consideration of the illusion of motion created
by the rapid projection of still images. Three 35mm slide projectors equipped with photocells
project a series of simple geometrical shapes at precise intervals. The slide images are
projected onto two screens: one screen is fixed, while the other is motorized and moves
through the planes of focus of the projected images. As the motorized screen travels through
the gallery space, the three channels of still images alternately combine into a single
animated image, then resolve into three separate still images. Inspired by Anthony McCall’s
seminal “solid light films,” the motorized screen allows the space between the projector and
the surface onto which the image is projected to be explored as sculptural form, and the
motion picture itself to be interrogated as sequential art.

Aura Retrieval Machine
As 16mm film follows the arc of its impending industrial obsolescence, its essential nature
shifts. Once an archetypal medium of mechanical reproduction– the infinite reproducibility of
the photographic image rendered material– 16mm film now grows more precious as its
material conditions become increasingly precarious. The AURA RETRIEVAL MACHINE
attempts to restore to the mechanically reproduced image what Walter Benjamin calls its
aura, the mark of its singular existence in time and space. In the few short seconds between
projection and obliteration, the aura is retrieved, just before the image is lost forever.
The 16mm films that are shredded by the Aura Retrieval Machine come from San Francisco
filmmaker Craig Baldwin’s collection of deaccessioned and discarded industrial and
educational movies. Most of the film prints have developed Vinegar Syndrome, a breakdown
of the chemistry of the acetate base of the film that gives the prints the smell of vinegar. This
breakdown is irreversible. These film prints are doomed. 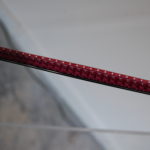 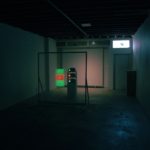 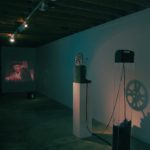