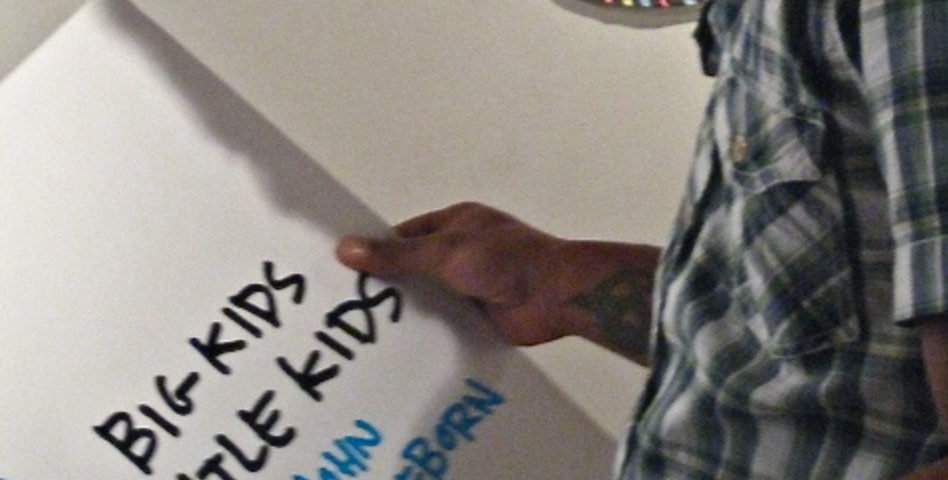 Lump is pleased to announce Big Kids / Little Kids, the traveling art exhibition curated by John Freeborn. Inspired by his book, the group exhibition features an impressive network of over twenty artists who have contributed to the emerging contemporary art movement in Philadelphia, PA.

The focus of the exhibition is “the artists from the book, and the intertwined connections that we all have,” Freeborn explains. “The show itself is an evolving exhibition, changing from venue to venue. The work at each show is specific to the venue, and aims to exemplify the interconnected, cross-influences, and friendships across this dynamic group of people.” Big Kids / Little Kids also supports the recognition and awareness of the Philadelphia art scene on a global scale. “Most people do not understand the breadth and variety in the work, and don’t see the influence that Philadelphia has had on the larger emerging art scene. The people who have been touched by this energy is really a testament to the people and culture created by the individuals involved.” Big Kids / Little Kids is an opportunity for visitors and collectors alike to discover the history and evolution of a kinetic art movement and explosive energy of creative talent.

Big Kids / Little Kids chronicles the first eight years of the newly emerging contemporary art movement in Philadelphia. It features native Philadelphia artists from SPACE1026, 1Pixel, 222gallery and Spector, as well as artists from outside the city who have shown in these spaces demonstrating the inspiration and influence of the Philly scene. The book showcases the artwork along with short dialogues with each artist. John Freeborn, one of the founders of SPACE1026, tells the story through his viewpoint, guiding the reader through the multi-layered connections that have helped fuel a new generation of artists from the city of brotherly love.

ABOUT THE ARTISTS
Jesse Goldstein has been a member of SPACE1026 since 2001. He is mainly a printmaker and a mess-maker. Recent projects include a children’s book, Sullivan’s Solo, illustrated by Ben Woodward and a curatorial project at Temple University Gallery called Manybody. He splits his time between Philadelphia and New York, where he is currently working on a PhD at the City University of New York.

Amy S. Kaufman was born in South Korea and earned a Masters of Fine Arts in Painting at the University of the Arts in Philadelphia. Kaufman creates works made of paper that draws upon the artistic legacy of Korean paper arts and her training in the United States. Her installations focus on a practice of repetition and accumulation of hand-folded paper. The activity of these pieces placed in different locations reveals an intimate act performed or displayed in a public space (this sentence doesn’t make sense). Her first solo exhibition From Scratch at Painted Bride Gallery in Philadelphia in 2007, featured a large-scale, labor-intensive installation. “Repetitive Acts”, a film by Danielle Lessovitz documenting Amy Kauffman’s Painted Bride installation, recently received an award for Excellence in Artist Profiles on Ovation TV and was recently screened at the Portland Women’s Film Festival. She has exhibited at numerous galleries in Philadelphia as well as in a group show at the Art Institute of Philadelphia.

Todd St. John is an artist, designer and filmmaker living in New York City. He grew up on the island of Oahu, Hawaii. His work consistently spans across many different mediums, including drawing, sculpture, photography, printmaking and animation. He often explores natural forms and their repurposing or distortion through unexpected modes of representation. St. John produces both commercial and experimental works through HunterGatherer, the studio/workshop that he founded in 2000. He has created animations, illustrations and graphics for everyone from MTV to Money Mark to The New York Times. In 1994, while living in California, St. John co-founded the graphic T-shirt label Green Lady with Gary Benzel. Nylon Magazine described Green Lady as “to the designer T-shirt world what RunDMC is to hip-hop”. St. John regularly has work published, broadcast and exhibited internationally, and was included in the 2003 Cooper-Hewitt National Design Triennial. He teaches as a graduate critic at the Yale School of Art.

Adam Wallacavage is an acclaimed photographer and founding member of the Philadelphia-based artist collective, SPACE1026. Known for his photographs of artists and skateboarders, Wallacavage has long documented the skating and art collective underground, as well as shooting for Thrasher Skateboard Magazine, Transworld and Shepard Fairey’s magazine, Swindle. In 2006, Wallacavage released Monster Size Monsters, his first published book spanning fifteen years of photography.

Andrew Jeffrey Wright is a current and founding member of Philadelphia’s SPACE1026 art commune. He has a Bachelor of Fine Arts in Animation. The collaborative animation “The Manipulators,” which he made with Clare E. Rojas, won the top prize for animation at the New York Underground Film Festival and the New York Comedy Film Festival. Wright’s highly limited edition handmade books have gained an international following. His works include painting, animation, drawing, collage, photography, sculpture, video, installation and screenprinting. He has shown at art galleries on the east and west coasts, including The Pennsylvania Academy of Fine Arts and Institute of Contemporary Art, which are both located in Philadelphia, and at the Foundation Cartier in Paris, France. He has shown with Barry McGee, Paper Rad, Leif Goldberg, Clare E. Rojas, Marcel Dzama and Michael Dumontier.

Shepard Fairey was born in Charleston, SC, in 1970 and currently lives and works in Los Angeles. In 1989, as a student at the Rhode Island School of Design, Shepard Fairey launched his ambitious street campaign of stickers featuring Andre the Giant. Fairey became an internationally known artist using the slogan “The Medium is the Message” in his “Obey Giant” street campaign. Since then his propaganda has become something of an anomaly and a design empire, encompassing stickers, clothing, skateboards, posters, stencil based graffiti, and film. As founder of Studio Number One, a design firm in Los Angeles, Fairey has worked with numerous high-level corporate accounts and co-founded Swindle magazine and Subliminal Projects Gallery. In 2005 Fairey was a resident artist at Honolulu’s The Contemporary Museum and designed the poster art for the feature film Walk the Line. The following year, Fairey contributed eight vinyl etchings to a limited-edition series of 12″ singles by alternative rock icons Mission of Burma and has also produced work for Interpol and the Black Eyed Peas.

ABOUT THE CURATOR
John Freeborn is co-founder of SPACE1026, the Philadelphia-based artist collective. He is creator of Milkcrate Digest zine, designer, teacher at the Art Institute of Philadelphia and University of the Arts, and skateboarder. He is also founder and president of Nested Group, an innovative design company based in Philadelphia, Pennsylvania. Freeborn released the book Big Kids / Little Kids in January 2007 at the ICA in Philadelphia coinciding with the Locally Localized Gravity show produced by SPACE1026. In December 2007 Freeborn announced the book was being turned into a traveling art show to launch in Philadelphia in 2008. 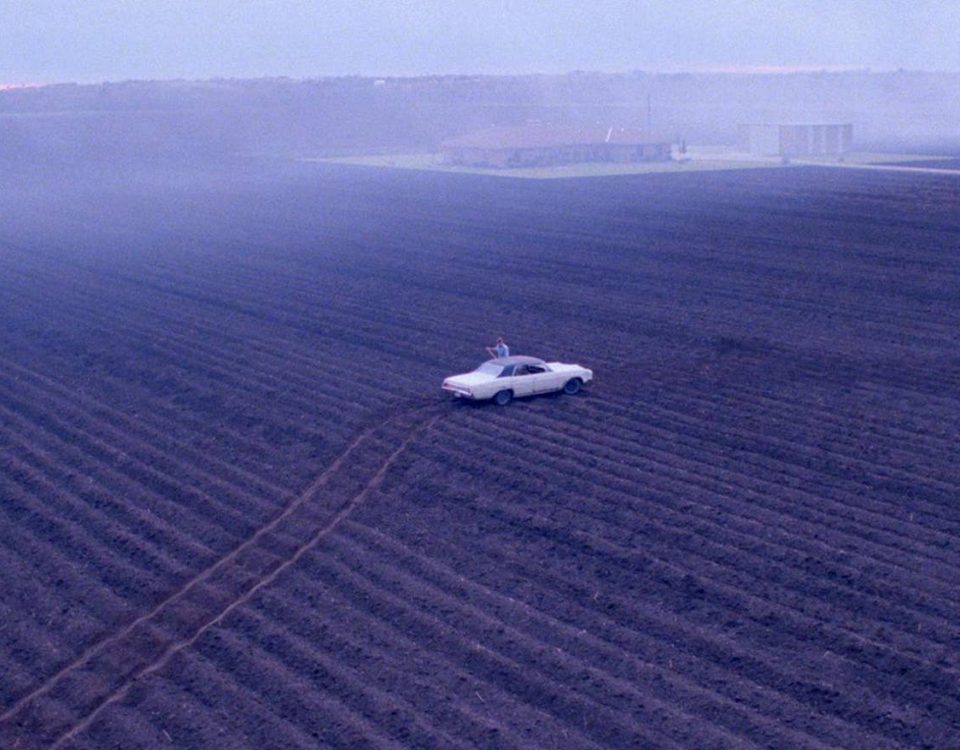