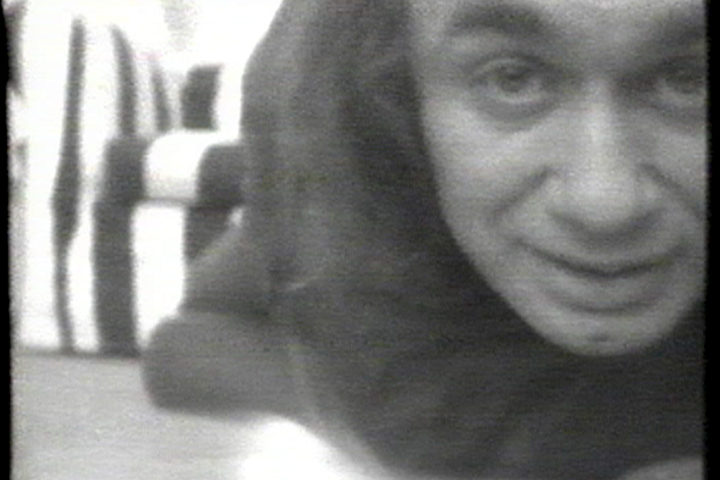 Image copyright of the artist, courtesy of Video Data Bank, www.vdb.org, School of the Art Institute of Chicago.

Up All Night describes the point at which video art and music video intersect. Born close to the same time and out of a single technology, these disparate forms are like fraternal twins, having evolved in divergent economies and separate creative worlds. Each was created by people whose ideals seem to be at odds with the other, yet inextricable.

a brief history of timecode

It’s possible to imagine a void where MTV originally existed, if it were not for Glen O’Brian’s TV Party, which first appeared on New York City public access television in 1978. It was a raucous blend of art and music that made a point of being “no budget,” technically naive and deeply cynical. It reflected the bankruptcy and disrepair of New York that had spawned a generation long, creative surge. But it aspired to deliver what was both fashionable and avant-garde, and its regulars like Jean-Michel Basquiat and Debbie Harry, were soon to be superstars.

MTV launched from the same city, in 1981. In contrast to TV Party, it boasted cozy sets, and its spokespersons were clean cut VJ’s (a term coined in the first minutes of MTV’s existence) who spun ebullience, feigned expertise, and promised the newest and sexiest of rock and pop’s bad boys and girls. MTV was an instant hit, and it would alter the creative impulses of generations to come, by way of sheer image volume that would accelerate, exponentially, a diminishing attention span.

TV Party’s cadence ran counter to the fervor that MTV offered. It meandered to the rhythm of a low brow talk show. Images dissolved randomly. Focus shifted without reason, and it seemed that someone was always futzing with the title generator. It portrayed a cirrhotic type of cool that was laced with real anxieties and its own brand of excess. Disorder was modus operandi, and there seemed to be no beginning or end to an episode.

In the shadow of the TV Party and the newly founded MTV, both formats, along with their content, converged in the video magazine, Night Flight, which first aired in 1981, on the USA Network. It was the first of its kind to manage a comfortable blend of art and music. At face value, it was all 80’s flash, with a chromium, title graphic that flew over a cool blue cityscape. But it occupied the late night air waves, and its content was tinged with the seediness of its more bizarre offerings – art videos and cult movies. The show paved the way for USA Up All Night, which highlighted exploitation films as de rigueur at the end of a decade in which entertainment culture was characterized by a firm bond between glamour and camp.

Here, you’ll see a sampling of video that is at its most elemental self. Each piece aspires no further than its original calling. Yet, each manages to rise above its own standards by stretching the limits of its form, through either conceptual weirdness or unabashed commercialism.

Music video’s job is to look good, enhance a band’s sex appeal and show off its talents. An art video sets out to challenge that very commoditization and to strain the application of the medium itself. In gunning for their respective goals, these forms hit antithetical targets. Music video achieves more than a modicum of art status by pushing spectacle, beauty and humor for the sake of sales. Video art burrows down into, and in some cases transcends, the crassness of music video by using studio practice, which is inherently unpredictable, as a framework; this, paired with the “spare every expense” ingenuity of its production.

But if we cast aside the cynicism and the circumstances that bore these fraternal twins, we can see how neatly they twist toward and away from each other, then intersect. If we strip them bare, the music is what remains. Each art video in this collection exudes its most genuine aspects through its audio track. Music holds firm at its core, even when there is no music to be heard outright. It takes the form a hand striking glass. An crisp, paternal voice. A perpetual drum beat. By the same measure, the artfulness of these music videos is brought forward by imagery that pays unwavering service to its song. It comes in the rhythm of slapstick narrative, or in a spinning stage that echo’s the uncanny whine of a keyboard. Or perhaps most stunningly, in the quiet awe of seeing a burning man run in extraordinary slow motion cinematography. Running for what? To catch a bus, just as the last screeching note goes silent.