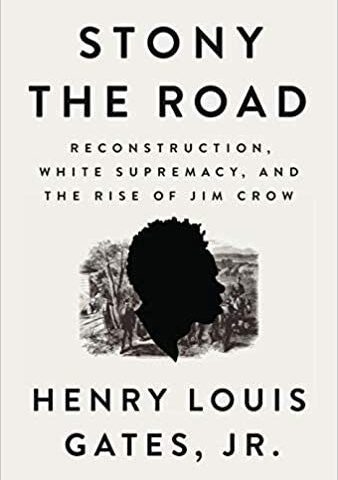 Curated this week by Michael S. Williams, founder of Black On Black Project

The book that has been on my mind a lot lately and one that I see parallels in its content to what we’re seeing today is Stony The Road: Reconstruction, White Supremacy and the rise of Jim Crow by journalist and Harvard Professor Henry Louis Gates, Jr. Yes, kind of a heavy topic. But these are heavy times.

Folks may be familiar with Professor Gates because of his Emmy Award-winning films and PBS specials on ancestry, Reconstruction and more. But he was also a member of the first class awarded “genius grants” by the MacArthur Foundation in 1981. This book is so vital because it’s a very plain look at Reconstruction (1865 to 1877) and Redemption (1877-), in which white supremacy broke apart the gains made during Reconstruction and caused many of the negative effects that we continue to see today.

The title of the book is taken from James Weldon Johnson’s poem “Lift Every Voice and Sing,” or as it has been referred to by the NAACP and others as the Black National Anthem.

Highlights that continue to stick with me: The political gains made by African-Americans during Reconstruction Professor Gates points out that during his period (Reconstruction and part of Redemption), roughly two thousand black men served in office at every level of government, including two United States Senators and twenty congressmen. That included Hiram Revels (Republican from Mississippi) who was born in Fayetteville, N.C., who took office in the Senate in 1870. He was the first African-American to serve in Congress. It also included George Henry White, who served North Carolina’s 2nd congressional district between 1897 and 1901. He was the last African-American to serve in either house of Congress until 1929.

Propaganda that started during the Redemption period

The book has a ton of images that show how some people viewed African-Americans and how some wanted to keep a negative, inappropriate and unfair perception alive. To help shape the thought process of some whites, Redeemers used imagery to not only sway political elections through political cartoons but also to sell products.

Remember D.W. Griffith’s The Birth of a Nation from 1915? Yeah, the film President Woodrow Wilson screened at the White House. You may not know it was based on a work called The Clansman by Thomas Dixon Jr. from a decade earlier about the KKK. Gates breaks down the impact of the film on culture and also the film industry. The book also shares origins about well-known household products like Aunt Jemima’s pancake mix and Uncle Ben’s rice. Professor Gates unpacks those images and the psychology behind them.

Overall, Stony the Road gives great historical context and is worth the time. It will add to one’s understanding of how and why so many things are like they are today. – MSW